Rosie Davidson’s book Deaths and Burials in the Parish of St John’s was launched at our annual Fox's Feast celebration in February 2011. Canon David Lewis, rector at St John’s, generously set aside time on his busy Sunday to come along to Fox’s Feast and to launch Rosie’s book. He spoke enthusiastically about the value of careful and detailed research such as that found in Rosie’s work. 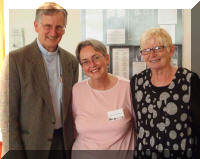 David, Dianne and Rosie at the book launch

In 2017 the information was added to a searchable database on this web site. This page details the sources and the abbreviations which have been used.

Information is taken primarily from the Burial Register for the Parish of St. John’s, New Town.  However, where information is missing, or gaps appear, information from other sources has been included in this database.  The first entry in the register is for Thos. Hibbens Morgan, an Orphan School boy, in December 1835 at the age of 12 years.  The last recorded burial entry is for Archdeacon Frederick Taylor Whitington on 31 November 1938 at the age of 85.  This index however, includes some deaths and burials which took place up to 1963 when many headstones were removed to Cornelian Bay Cemetery.

Entries shown with a number prefixed with ‘B’ indicate numbers from the register.  I have attempted to follow the numbering used in the register but these are not always consistent.  Some entries do not have a number and in other cases duplicated numbers have been used.  Numbers have been inserted for those missing and * added to the end of repeated numbers.

CBC—Cornelian Bay Cemetery
Burials found when checking other entries. (Numbering is mine.)

CI—Card Index
CI indicates Card Index which is held by the parish.  (Numbering is mine.)  It appears to have been compiled at a date later than the commencement of the actual burial register.  Many discrepancies have been found and as previously stated only entries which are additional to the burial register have been included in this database.  It has proved useful in filling in some of the blank areas in the register.

CT—Cemetery Transcription (AOT Ref: NS656/1/32)
The CT prefix relates to cemetery transcriptions which appear to have been compiled in the 1930s.  (Numbering is mine.)  This document lists the headstones in sections with names and dates, but not full transcriptions.  No actual plan has been discovered to date but we hope to produce a possible layout with the help of aerial photographs and the sections noted in this document.

TAMIOT—Tombstone and Memorial Inscriptions of Tasmania
A collection of transcriptions from all known tombstones/headstones within Tasmania which were transcribed over many years by members of the Tasmanian Family History Society Inc. (TFHS Inc.)

Information in the ‘Name’ column is as it appears in the register with variations in spelling and alternatives added.  These are taken from other sources used.

The ‘Abode’ column is a combination from all sources.  The Burial Register usually only records ‘Hobart’ or New Town’ but where available street names have been added.  These have mostly been found in newspaper death notices.

The burial dates are as they appear in the burial register.

Ages are as they appear in the burial register.

COLUMN 6 and 7—CT and Cemetery

There are two columns under the heading ‘CT and Cemetery’.  The information in the first smaller column refers to the numbers given in a cemetery transcription.  The larger column refers to current placement in Cornelian Bay Cemetery where known.

The ‘Remarks/Profession’ column has been compiled from all sources.  Names in italics refer to ship’s name and if in brackets, to name of an hotel, e.g. [Queens Head].

The second last column is the date of death from the Additions and some differences are in bold.

These have been used to obtain date of death registration.  Some dates, especially those for Orphan School children, are taken from the indexes compiled by Joyce Purtscher, especially Children in the Queen’s Orphanage Hobart Town 1828–1863, first published in 1993, as some of these deaths pre-date the required registration of Births, Deaths and Marriages.

The final column ‘Death Notice’ has the date a death notice appeared in the Mercury or other named newspaper.  There are often multiple entries.  Entries from other sources have not been duplicated, only new information has been added.

The Mercury and Hobart Town Courier
Although most death notices are from the Mercury, some earlier newspapers have been checked.  It is hoped to produce full transcriptions of these in the future.

Also Included in this Register

Registers for these burials have not been found—these names are compiled from the work of Joyce Purtscher.  Joyce has published many indexes on children in care.

It must be stressed this is only an index and anyone researching their families or the people and buildings within the precinct of St John’s are advised to check all original sources in full where possible.  It is particularly useful to check newspaper funeral notices for the cemetery where the burial took place as there may be confusion with St John’s Anglican in Goulburn Street and also Queenborough Cemetery.

A full list of all abbreviations used in this register may be found here.